Starting in the Fall 2016 season, in alignment with U.S Soccer initiatives, GSC began using January 1st as the age cutoff. Therefore your child’s birth year is all that is needed to determine their playing age.

* NOTE, playing age is strictly determined by birth year as detailed below. GSC reserves the right to modify or combine age groups (and possibly genders) as needed to form competitive divisions based on the number of players registered. U18 team is formed only if enough players register to field a full team.

The below chart can be used for checking the playing age of your player. Seasons run from Fall-Spring and players keep the same “playing age” across those seasons. In the chart the seasons are listed as Fall-Spring, so that the 2016-2017 column represents the Fall 2016 and Spring 2017 seasons.

To check for the Spring 2017 season for example, find the 2016-17 season column and birth year row until they intersect and that is the playing age of the player. For the Fall 2017 season you would use the 2017-18 column. The chart is color coordinated to show what ages are combined into age groups. Ex – For Spring 2017 the U8 division contains players born in 2009 and 2010. 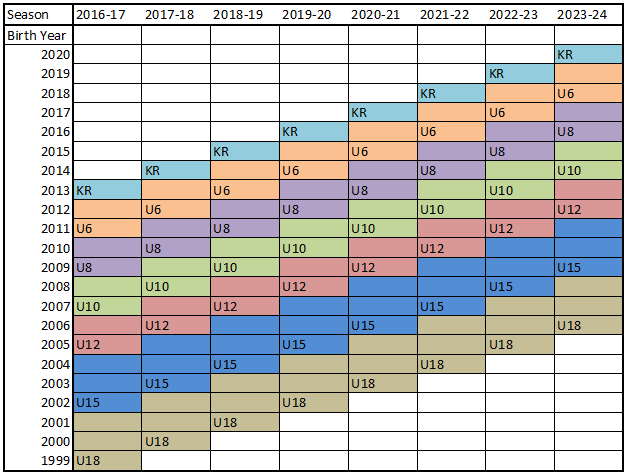