Below is the schedule that will be used for making up our Week 3 games that were rained out. We have to work around referee availability, but we have done our best to ensure that each division has a chance to get their week 3 games in. Some games will be shortened as listed below to ensure that we can get games completed without keeping teams too late for weeknight games. A downloadable and printable version of the make-up schedule is available HERE. 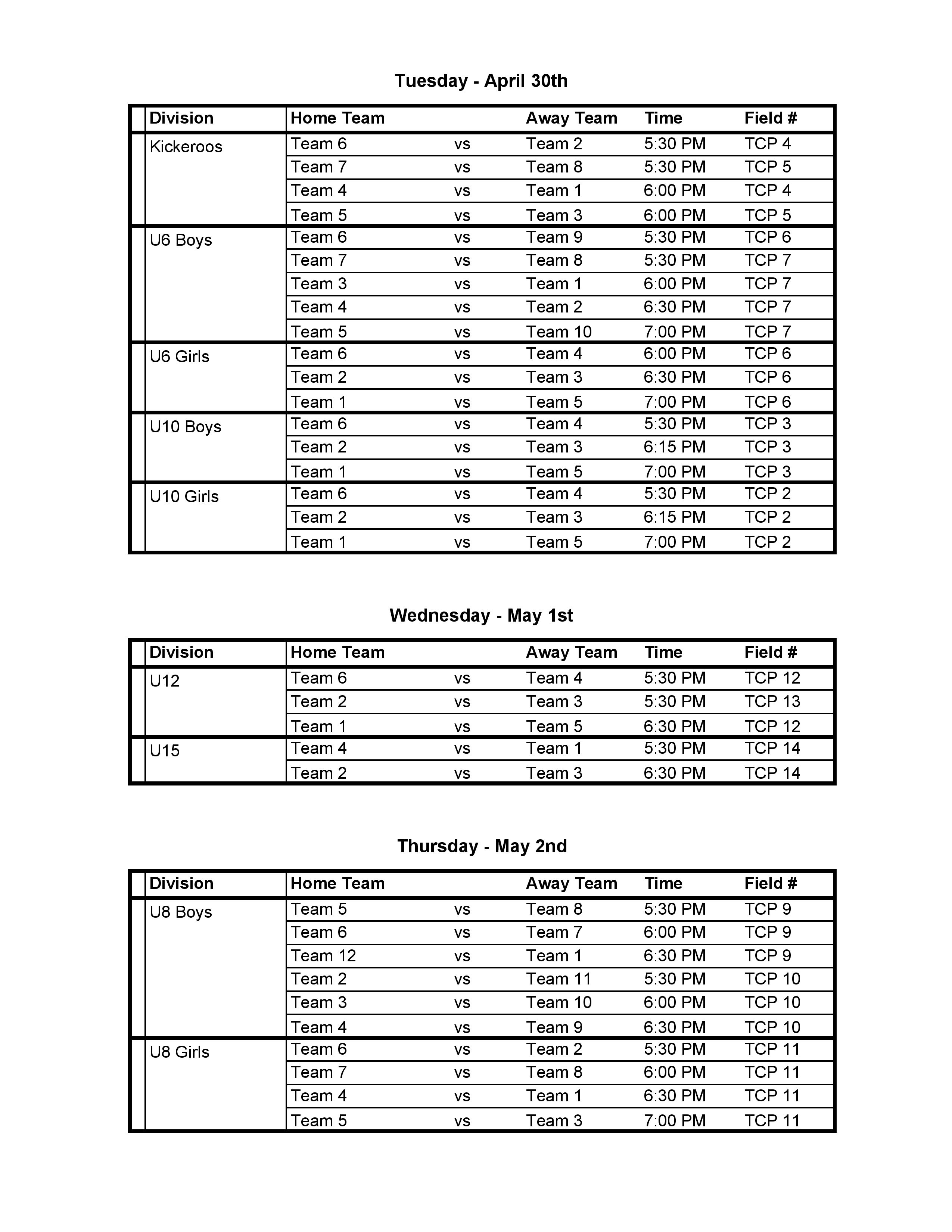 GSC Families, due to some needed renovation changes and construction that will be taking place inside the GSC concession stand, it is going to be CLOSED for the duration of the Spring 2019 season. However, GSC has been working with vendors who will be coming to our games to offer our families food and drink options while that construction is under way.

These vendors will be offering concessions selections throughout the game day, INCLUDING moving to the upper fields for afternoon games. This is a welcome PLUS for our U12 and U15 players, coaches, and parents!!

PLEASE NOTE this means that we will NOT be able to offer the TEAM SNACK deals. We recommend that any teams, coaches, or parents wanting to provide team wide snacks (chips, cookies, oranges, etc) plan to bring those to the field with them instead of relying on purchasing them at the park.

The GSC Spring 2018 Coaches Meeting is set for Saturday, March 17th. Most age groups will have a coaching clinic right before OR right after their meeting. Please be prepared to attend the meeting and the clinic. The times for each division and when their meeting and clinic is are below.

The TN State Soccer Association is running a FREE 3 hour Creative Coaching diploma course in Gallatin, TN for all coaches at all levels.

To register for this course, use the below link. If this date doesn’t work, there are other Creative Coaching Academy courses in the Middle TN area available for registration!
https://www.ccatraining.com/register-for-a-course/

To learn more about these short 3 hour courses visit:
https://www.tnsoccer.org/creative-coaching-acadamy

We hope to see you there!

Saturday August 19th will be our Fall 2017 coaches meeting. Immediately following the coaches meeting for each age group will be a coaching clinic where we will discuss and demonstrate age appropriate practice sessions. Please be prepared to attend! See our Questions From Coaches page for information on what to complete prior to the coaches meeting.

Wear athletic shoes for the coaching clinic as some may be asked to participate in the activities. Nobody will be judging your playing ability, it is just helpful and more conducive to learning to be able to demonstrate an activity as opposed to just talking about it.

Hello to all our families in the Gallatin Soccer Club!

We are approaching the start of the Fall 2017 season and I wanted to give you a few updates relative to the club as a whole and to a few specific age groups.

FIRST, and this is the reminder most pertinent to all our families, our age directors are currently securing coaches for the season. Coaches will meet on SATURDAY, AUGUST 19TH and will get their rosters then. You will not hear from a coach until the afternoon of August 19th at the earliest, and because of the Solar Eclipse Experience in Triple Creek Park on Monday, August 21st, we cannot start practices until Tuesday, August 22nd.
The schedule overview can be found here: http://gallatinsoccerclub.org/recreational/schedule/

SECOND, the Board of the Gallatin Soccer Club wants to thank and recognize Milton Madewell for his long service and deep commitment to youth soccer in Gallatin. Milton has led GSC for over two decades and this summer announced to the board his retirement from the role. We appreciate all he has done and will publicly acknowledge his contributions this Fall.

My name is Jamey Campbell and I was elected by the Board to follow Milton as President. I have previously served the GSC Board as VP for Administration, U10 Age Director, U6 Age Director and as a parent-coach. My sons both got their soccer starts in recreational soccer with the Gallatin Soccer Club and this summer have moved to the Rangers side of the GSC. As much as their Rangers schedule will allow, I will be at Triple Creek Park to observe games, talk with families, and help carry on the operation of our recreational practices and games.

THIRD, in an effort to improve player safety and increased emergency response preparedness, we will have new safety equipment in place before the first games of the season. We are completing major purchases of both an Automated External Defibrillator and a Portable Lightning Detector. Both will be housed inside the club house at Triple Creek Park and to start out, the GSC Board will be trained in the access and use of the AED. We will also purchase a few air horns to use as an indicator to stop play and clear the fields in the event of inclement weather. Please note, we do expect that both instruments will need to be housed indoors at the club house so will be primarily available on game days.

FOURTH, we are implementing a new uniform policy for this season and expect this will run with us for several years. With a primary goal of cost savings to families, and a secondary benefit of simplifying player moves when necessary, all players will receive a reversible green/gray jersey, black shorts, and matching pairs of socks in green and gray. While it will be harder to explain to visitors which field to look for, we hope that the ability to wear one jersey for three or more seasons, and to pass jerseys down to younger siblings, will be a cost savings measure families appreciate. So long as the uniform fits, or has been handed down, the family will only have to pay the registration cost season by season.

FIFTH, there are changes affecting two of our age groups we want to share with you. First, to move us inline with US Youth Soccer age guidelines, our U8 divisions will be playing 4v4 starting this season and will not include goal keepers. We had two years with that change as a recommendation, but now it is a mandate. Second, based on the numbers of registered players in the U10 division, we made a decision to combine the girls and boys to a coed group. That gives all teams an appropriate number of subs and allows for a 7-week season playing each opponent once. We will re-evaluate the decision in the Spring based on registration numbers, but this moves U10 currently in line with the coed play we have used for a while in both U12 and U15.

So, as we begin the new season and the next chapter together for recreational soccer in Gallatin, I look forward to the Fall and to being a part of your family’s lives over the next few months. I hope you will look for Board members at the fields in our red polos or black jackets as the season goes along. We appreciate your commitment to good sportsmanship on the sidelines (whether as parent or coach), and to your assistance with the improvement of your player and youth soccer overall in Gallatin!

See you at Kickoff!

It has been a busy off season for youth soccer and with that comes changes from  the US Soccer Federation and the Tennessee State Soccer Association.  Included in these changes are new player development initiatives which involves changes to the cutoff used for age grouping and format of play, new concussion policies related to heading a soccer ball, and requirements for awareness on Sudden Cardiac Arrest.

Here are a couple of TSSA links regarding the stance of our state soccer association:

We appreciate your understanding and cooperation as we adapt to meet the new US Soccer Federation mandates.

In accordance with the Tennessee Public Chapter 148 Legislation and the TSSA Policy 31, it is mandatory that the Gallatin Soccer Club (GSC) informs and educate coaches, youth athletes and their parents and require them to sign respective concussion information forms before competing. More information on this is available at Tennessee Sports Concussion Law and TSSA Concussion Policy.

Parent (with child under the age of 18) or Player (age 18)
In compliance with the legislation, the GSC issued the Parent Athlete Signature Form when registering for the Fall 2015 season.

Online registration required review and acceptance of this form in order to complete registration and no further action is required.

If you did not register online, you were provided the form to review and sign during the registration process. No further action is required.

Coaches
In compliance with the legislation, the GSC requires:

1.) Review and sign the annual Coach Signature Form. Please print, review, and return the signed form to your division Director at the Coaches Meeting on August 22nd.

2.) Be familiar with the Concussion Checklist.

3.) Complete a Concussion Recognition and Head Injury safety education course approved by the Tennessee Health Department. This is a video that takes approximately 25 minutes to complete. Please print the certification provided upon completion of the course and return to your division Director at the Coaches Meeting on August 22nd.

Following a Suspected Concussion
In accordance with the with Tennessee Public Chapter 148 Legislation and TSSA Policy 31 it is the policy of the GSC:

a.) To require removal of a youth athlete who appears to have suffered a concussion from play or practice at the time of the suspected concussion.

b.) To require a youth athlete to be cleared by a licensed health care professional before returning to play or practice. The Return to Play Form contains specific instructions that must be followed before an athlete can return to sports. This will be provided at the Coaches Meeting on August 22nd.